Stormwater discharges are generated by runoff from land and impervious areas such as paved streets, parking lots, and building rooftops during rainfall and snow events. As the runoff moves across the surface it will pick up pollutants, such as trash, chemicals, and sediment, in quantities that often will adversely affect water quality. Most stormwater discharges are considered point sources and require coverage by a National Pollutant Discharge Elimination System (NPDES) permit. The primary methods to control stormwater discharges are through the use of structural and nonstructural Best Management Practices.

Phase II is the next step in an effort to preserve, protect, and improve water resources impacted by stormwater runoff. Phase II includes smaller construction sites, small municipalities (populations of less than 100,000) that were temporarily exempted based on their industrial activity, and small MS4s. Phase II is designed to further reduce adverse impacts to water quality, and it places controls on runoff that have the greatest likelihood of causing continued environmental degradation. The City of Grand Forks was designated as a MS4 under the Phase II program and was required to develop a Stormwater Pollution Prevention Program by March 10, 2003.

The City of Grand Forks is currently authorized under permit number NDR04-0000 effective on April 1, 2016 and expiring March 31, 2021 to discharge stormwater to the Red River of the North as long as permit requirements are me

Return all SWPPP Documents to the Engineering Department.

Operation and Maintenance for Construction Sites 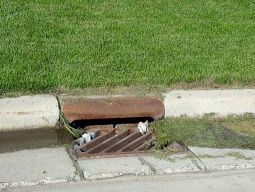