What is a Roundabout?

Modern roundabouts were developed in the United Kingdom in the 1960s and now are widely used in many countries. The modern roundabout is a circular intersection with design features that promote safe and efficient traffic flow.

Within the roundabout and as vehicles exit, slow speeds are maintained by the deflection of traffic around the center island and the relatively tight radius of the roundabout and exit lanes. Slow speeds aid in the smooth movement of vehicles into, around, and out of a roundabout. Drivers approaching a roundabout must reduce their speeds, look for potential conflicts with vehicles already in the circle, and be prepared to stop for pedestrians and bicyclists.

Once in the roundabout, drivers proceed to the appropriate exit, following the guidance provided by traffic signs and pavement markings 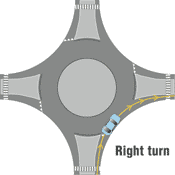 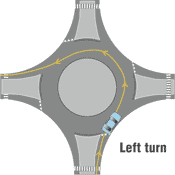 How do roundabouts affect safety?

Several features of roundabouts promote safety. At traditional intersections with stop signs or traffic signals, some of the most common types of crashes are right-angle, left-turn, and head-on collisions. These types of collisions can be severe because vehicles may be traveling through the intersection at high speeds.

With roundabouts, these types of potentially serious crashes essentially are eliminated because vehicles travel in the same direction. Installing roundabouts in place of traffic signals can also reduce the likelihood of rear-end crashes and their severity by removing the incentive for drivers to speed up as they approach green lights and by reducing abrupt stops at red lights.

The vehicle-to-vehicle conflicts that occur at roundabouts generally involve a vehicle merging into the circular roadway, with both vehicles traveling at low speeds — generally less than 20 mph in urban areas and less than 25-30 mph in rural areas.

Below is a figure showing signs and lane markings used at roundabouts. 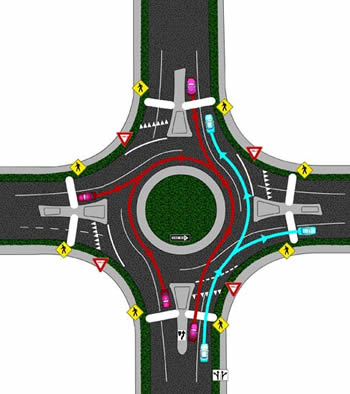 Despite the demonstrated safety benefits of roundabouts, some crashes still occur; the two most common crash types are “failure to yield” and multi-lane roundabouts “include improper lane selection”.

Are there other benefits?

Yes. To accommodate vehicles with large turning radii such as trucks, buses, and tractor-trailers, roundabouts provide an area between the circulatory roadway and the central island, known as a truck apron, over which the rear wheels of these vehicles can safely track. The truck apron generally is composed of a different colored material than the paved surface, usually a reddish colored concrete, to discourage routine use by smaller vehicles.

How do roundabouts affect older drivers?

Age-related declines in vision, hearing, and cognitive functions, as well as physical impairments, may affect some older adults' driving ability. Intersections can be especially challenging for older drivers. Relative to other age groups, senior drivers are over-involved in crashes occurring at intersections.

In 2006, forty percent of drivers 70 and older in fatal crashes were involved in multiple-vehicle intersection crashes, compared with 22 percent among drivers younger than 70.

Older drivers' intersection crashes often are due to their failure to yield the right-of-way. Particular problems for older drivers at traditional intersections include left turns and entering busy thoroughfares from cross streets. Roundabouts eliminate these situations entirely.

Are roundabouts safe for pedestrians?

Is there any other areas installing roundabouts?

The first modern roundabouts in the United States were constructed in Nevada in 1990. Since that time, although the precise number of roundabouts is unknown, approximately 1,000 have been built. By comparison, there are about 20,000 roundabouts in France, 15,000 in Australia, and 10,000 in the United Kingdom. States that have active programs to construct roundabouts include Alaska, California, Colorado, Connecticut, Florida, Hawaii, Indiana, Kansas, Maryland, Michigan, Minnesota, Mississippi, Nevada, New Hampshire, New York, North Carolina, Oregon, South Carolina, Utah, Vermont, Virginia, Washington, and Wisconsin.

We hope that this brochure has been informative and has illustrated some of the pros and cons associated with stop signs. These devices can produce negative impacts on the environment and waste unnecessary tax reserves.

Therefore, they should only be installed when warranted by a competent engineering study. If you have questions or suggestions concerning traffic, please call the Engineering Department at (701) 787-3720.