Radon is an odorless, tasteless, colorless, and radioactive gas that occurs wherever uranium or thorium, two radioactive metals that naturally occur in the soil, are found.  Radon is continuously released into the soil, water, and air as uranium and thorium slowly break down; a process that can take millions of years to complete.  To learn more about radon in North Dakota, click here to access the North Dakota Department of Health’s radon information page.

Due to its radioactivity and prevalence rate in the United States, radon is considered a serious public health issue by the U.S. Environmental Protection Agency (EPA) and the Centers for Disease Control and Prevention (CDC).  The EPA estimates that radon is the number one cause of lung cancer in nonsmokers and is the second leading cause of lung cancer overall.  Recent studies have concluded that there is a solid link between prolonged radon exposure and lung cancer.  Current radon prevalence maps and other information can be found on the EPA’s website.

Radon in the Home

As a gas, radon can seep into a building from the soil through any cracks or holes in the foundation and may rapidly accumulate over time.  Scientists have determined that the greatest threat of long term exposure to radon occurs in the home; a place where most people spend the majority of their time.  Radon is a relatively heavy gas and the strongest levels of exposure in a home typically occur in the basement or other lowest level.  When the radon is trapped inside the building, the overall radon level inside can rise to dangerous amounts.

The EPA recommends that homeowners and renters alike should test for radon to determine the amount of the gas that is present in their living space.  Radon levels can measured in three different ways: picocuries per liter of air (pCi/L), working levels (WL), and bequerels (Bq); picocuries are the most common unit of measurement in the U.S.

While there are professional companies that can conduct radon testing in homes and other buildings, it is possible for anyone to successfully test for radon.  There are two different types of test kits that are available; a short term test and a long term test.  It is best to start off with using the short term kit as long term testing may not be necessary depending on the radon levels detected.  The CDC has more information about radon testing and action plans here. 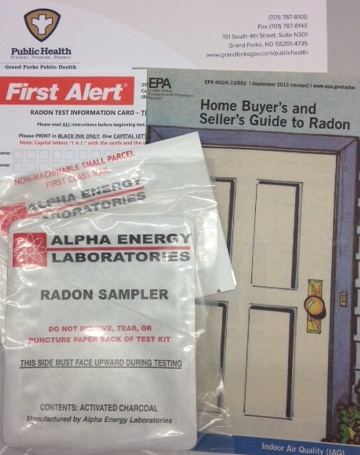 A short term radon test typically takes anywhere from 2 to 90 days depending on the specific kit used.  The kit, usually consisting of a charcoal holding device, is left in the most used room of the lowest level of a house or building.  Be sure to follow the instructions of the specific kit being used as any deviation could affect test results.  After completion of the test, the kit must be mailed to the address on the prepaid mailing envelope within 10 days after testing.

Depending on the final level of radon found in the home, further action may be taken.  If the test result came back as anything below 4 pCi/L or the equivalent (see the table below), no further action is necessary although it is recommended the room be tested again in the future depending on usage and time spent there.  If the test results are 4 pCi/L or greater, a long term radon test should be taken.

Long term testing can take 90 days or longer to complete but will provide a homeowner or renter a more accurate look at the average yearlong radon levels found.  If the results of the long term test are the same or higher than the first short term test, steps should be taken to alleviate the radon build up via home or building modification.

There are several different types of radon mitigation systems that can be installed in a home or other building to reduce radon levels.  One of the more popular mitigation systems, the sub-slab depressurization method, consists of a series of pipes and an exhaust fan.  Its purpose is to collect radon from underneath the foundation and safely expel it outside before it enters the house.  Oftentimes, contractors installing a radon vent system will also seal any cracks or holes in the foundation of the home which makes the mitigation system more efficient and cost-effective.  It is recommended that a homeowner with concerning levels of radon contact a building contractor that specializes in radon mitigation to see what type of radon system would work best for their home. 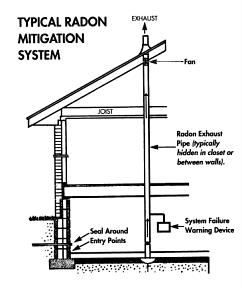 A radon mitigation system comprising of a vent pipe and exhaust fan.

National Radon Program Services - Results: What do they mean?

A Citizen's Guide to Radon